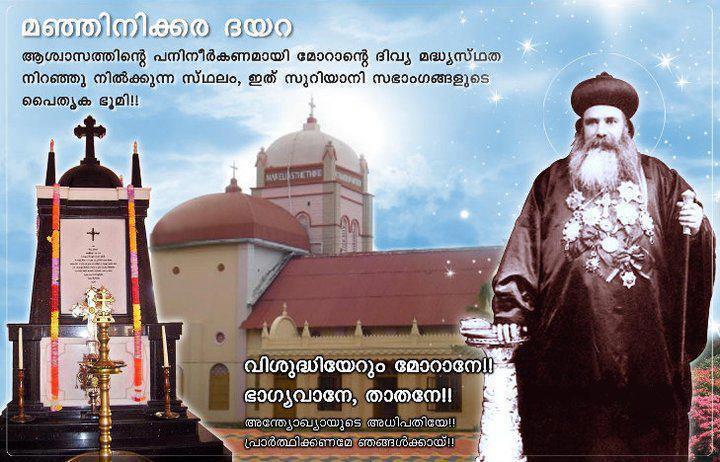 Mor Ignatius dayara (dayro; monastery), well known for the tomb of Patriarch St. lgnatius Elias III, is a major pilgrim centre of the Syrian Christians of India. The monastery, situated atop a hillock in Manjinikkara, near Omallur, Pathanamthitta District in South Kerala, was established by late Mor Yulius Elias Qoro, the patriarchal delegate to Malankara. It was in 1932, Patriarch St. lgnatius Elias III, widely acclaimed as ‘Angel of Peace’, entered into the heavenly abode in Manjinikkara while on a visit to the churches in India and his mortal remains were later entombed in the dayro. In the subsequent years, faithful from all over Malankara frequented the tomb of the holy father and thus the monastery gained the status of a major pilgrim centre of Christians. The feast of the holy father celebrated on February 13 annually is the most important day for the dayara, when lot of pilgrims from various parts of the country reach here by walking. The remains of late Metropolitans Mor Yulius Elias Qoro, Patriarchal delegate from 1930-1962, Mor Yulius Yacoub (1975-1992) and Mor Osthatheos Binyamin Joseph (1992-2004), former Patriarchal delegates to Malankara are also interred in this church. Dayara and its property is belongs to the Holy throne of Antioch. The present owner of this Dayara is 122nd successor of St.Peter in the Apostolic See of Antioch, His Holiness Moran Mor Ignatius Zakka I Iwas. The Manjinikkara dayara is the seat of the Patriarchal Delegate to Malankara and the metropolitan of the Simhasana churches (churches administered directly by the Patriarchate). The present abbot of the dayara is Mor Deevanasios Geevarghese.

Lord Irwin, the British Viceroy of India, who visited Malabar in 1931, heard about the schism and litigation of two factions of Malankara Syrian Orthodox Church, one supporting the Patriarch and the other supporting the Catholicos. Being a true Christian his Lordship Earnestly desired for everlasting peace in the Malankara Church, and so studied about the causes of the rift between the rival factions. His Lordship learned that only the Patriarch of Antioch could find a possible solution on this matter. So through the representative of Iraq, His Lordship invited the Patriarch of Antioch of Antioch Moran Mor Ignatius Elias III to Visit India, and offered him all assistance from the British authorities in India. Patriarch Ignatius Elias III was also deeply concerned about the schism in Malabar and was thinking of a solution by visiting India. Inspite of his old age sickness and physical weakness, His Holiness decided to visit India. His doctors dissuaded such a long journey, but his Holiness was firm in the decision for the sake of peace in Malankara Church. Traveling by ship named S.S Varsova from Basra port in Iraq with followers His Holiness reached Karachi on 4th March 1931. From Karachi, the team travelled by train to Delhi and stayed there as a guest of Viceroy. After a few days the Patriarchal team moved to Madras by train to meet the Governor General. Initial talks were held with the British Bishops and later His Holiness proceeded to Malabar. His Holiness and party reached Aluva on 21st March 1931, and stayed in the Thrikkunnathu Seminary.

Bible Verse of the Day

Above all, love each other deeply, because love covers over a multitude of sins.
1 Peter 4:8
DailyVerses.net