[The resolution (Padiyola), unanimously accepted by the Malankara Syrian Church at the  the historical Mulunthuruthy Synod]

The Original was written in Malayalam, a free translation is given below

Obeying your Holiness’ Kalpana, dated 19th Edavom 1051 (1876) to all Churches, we have assembled on the 15th Midunam in this Church at Mulunthuruthy, built in the name of Mor Thoma Sleeha (Apostle) and we heard of our Holiness” Circular Kalpana, read publicly on the occasion of the inauguration of the Synod, asking us to codify measures to the effect that we may be firm in the Orthodox faith and in the obedience to the commands from the Throne of Antioch.

As it is essentially necessary to show that our Church in Malayalam (Malankara), had been continually watered and nurtured by the presence of Antioch, we submit a brief history of this Church, from the time it was guided by St.Thomas and we submit also measures to be taken, so that this Church, may not hereafter, be robbed by the enemies and it might always remain firm in the faith and obedience.  And we do most humbly request, that our prayers may be read and measures confirmed by Your Holiness.

We, hereby declare before the High priesthood of Your Holiness that from the Faith of the three Holy Synods handed over to the Holy Church, and from commandments of your Holiness, the Head of our religion and Faith, neither we nor our children would depart either to the right or to the left – up to our death. And we, take this Solemn Oath, holding Sleeba (Cross) and Evangelion (the Gospels) before God and in the presence of your Holiness, that there would be no departing from this until the last moment of our death.

List  of 24 Member Committee constituted at the Mulunthuruthy Synod 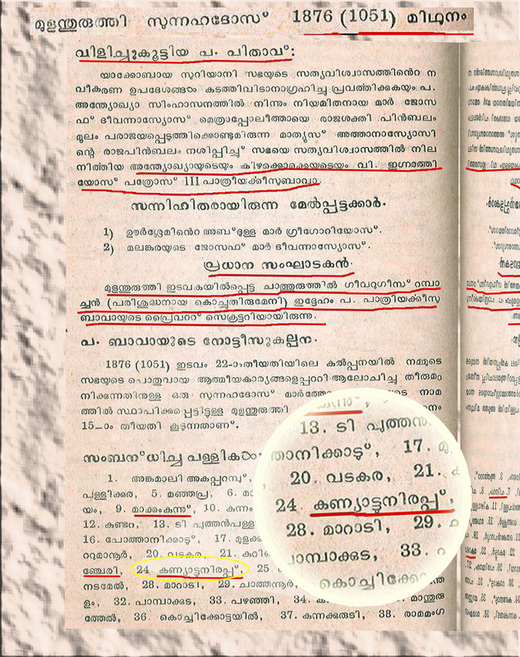 Bible Verse of the Day

My times are in your hands; deliver me from the hands of my enemies, from those who pursue me.
Psalm 31:15
DailyVerses.net